Company builds on 20 years of farm machinery with tools for the Canadian market, based on similar crops and conditions 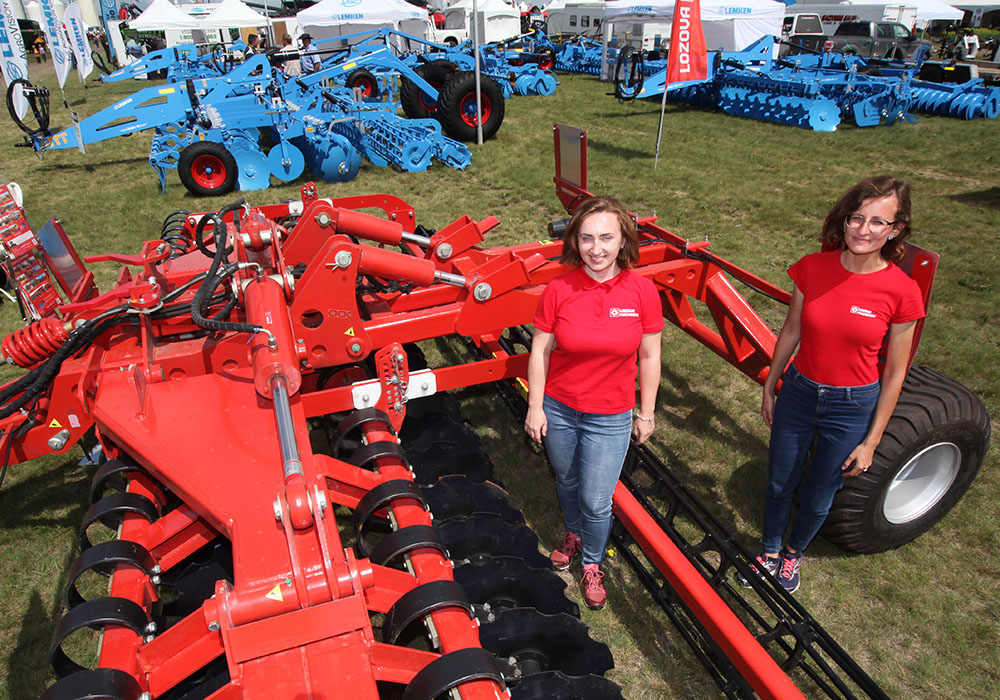 ​
Olena Peleshok, left, and Victoriia Shebanova of Lozova Machinery in Ukraine show off their Ducat compact disc harrow at the Ag in Motion farm show in Langham, Sask. | Michael Raine photo
LANGHAM, Sask. — Canada and Ukraine are a lot alike.
The two countries share many of the same growing conditions and Ukrainian farmers grow a lot of the same crops and livestock as their Canadian counterparts, so the machinery from each can be a good fit.
Often Canadian producers think about Canadian air-seeding and swathing tools travelling to Ukraine, but expanding trade horizons now see equipment making the return voyage.

“We see great opportunities in Canada. So much of the agriculture is in common,” said Victoriia Shebanova of Lozova Machinery.
Shebanova said the activity at her company’s booth during the Ag in Motion farm show at Langham, Sask., last week confirmed the company’s suspicions that the Prairies is a market for its equipment.
She and colleague Olena Peleshok, who handles sales from the company’s Canadian office in British Columbia, agreed that that interest in the compact disc harrow they brought to the event was steady.
Peleshok said the company had sold seven of the units this year after securing a distributor in Ontario last season.

The Lozova Ducat compact disc is available up to 55 feet wide. The model at the Ag in Motion show sports a three point hitch mount. | Michael Raine photo​
“The machines seem to be a fit. The farmers are giving us some feedback at the show and we will likely bring more of the (lineup) of equipment next year,” she said.
The compact disc harrow is a steel spring shank mounted disk that allow the slotted discs to move both vertically and horizontally, with the ability to rise up or to the side when encountering rocks.
“They vibrate a lot and that keeps the discs clean and helps shatter the soil (profile). And it leaves a very smooth seed bed,” she said about the tools, which attack the soil at a 20-degree forward angle and 12-degree vertical one.
Shebanova said the discs’ movement also means the rest of the tool rides flat if a disc meets an obstacle. 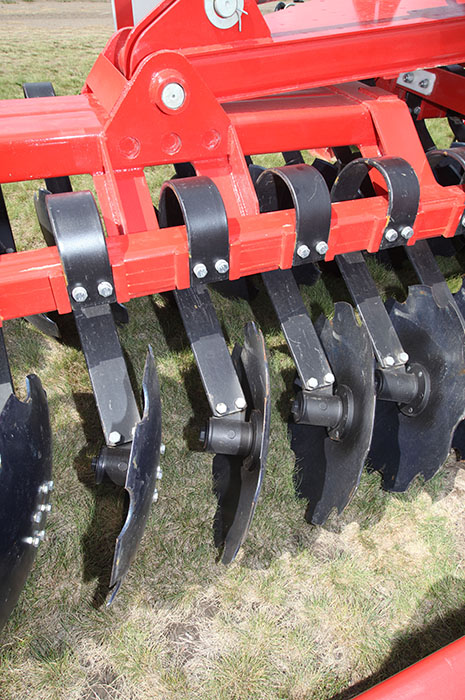 The spring-shank mounted discs provide flixibility for rocks and a vibration that keeps disc clean and shatters soil. | Michael Raine photo​
“The discs are very tough. It is a boron-treated steel from Bellota. They are very low wearing, so that keeps the cost of ownership down. The bearings are the same way,” said Shebanova, an engineer and sales director for Lazova.
Disc bearings are sealed units, but can be serviced through the removal of the end plug.
The company was in the bearing business before it got into farm machinery and that remains a large part of its overall operations, with its Harp line of bearings.
The Harp Agro bearing used in the Ducat compact disc relies on three levels of support and sealing. At the outer edge next to the hub an integrated lip-seal keeps the world out and the grease in. A cassette-type seal provides a wider sealing surface, and a labyrinth cutter between this and the bearings ensures it stays tight, even with some wear. The bearings are filled with a long-life Chevron grease. 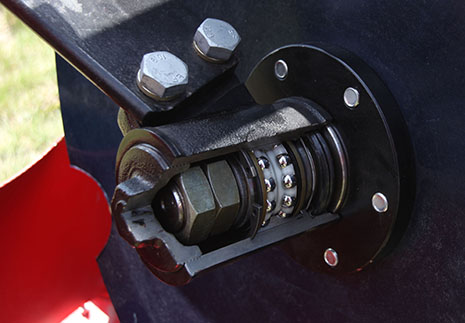 The HARP Agro bearings and the integrated cast mounting are all built by Lozova. The sealed units are serviceable, however the company says it is unlikely that it will be needed. | Michael Raine photo​
“If you ever did need to enter the bearing, which is unlikely, you still could by removing the threaded (plug) at the outer end,” she said.
The hubs have a cast, two-bolt flange for mounting the discs.
“We build all of the machine, right down to the bearings,” said Shebanova.
Roller baskets, mounted on rubber blocks, or tine harrows follow the two ranks of discs to provide field finish. Other finishers are also available, said Shebanova.
“Pack rings, the solid type you see becoming popular here and the big rubber rollers. Also toothed types, not as common in North America.”
“We make these in from very small for three point hitches and up to 55 feet wide,” she said.
An even heavier duty version is also available.
“Next year we might be looking at bringing to Canada the tooth harrows (a heavy harrow), like you use here. We use this equipment the same at home,” she said.
“Our prices and quality make the machines very competitive in the Canadian market.
“It is a smaller country than Canada, but we have most of the same crops, from corn and horticulture to large farms with big grains and oilseeds, like in Canada, depending where you live and farm.”