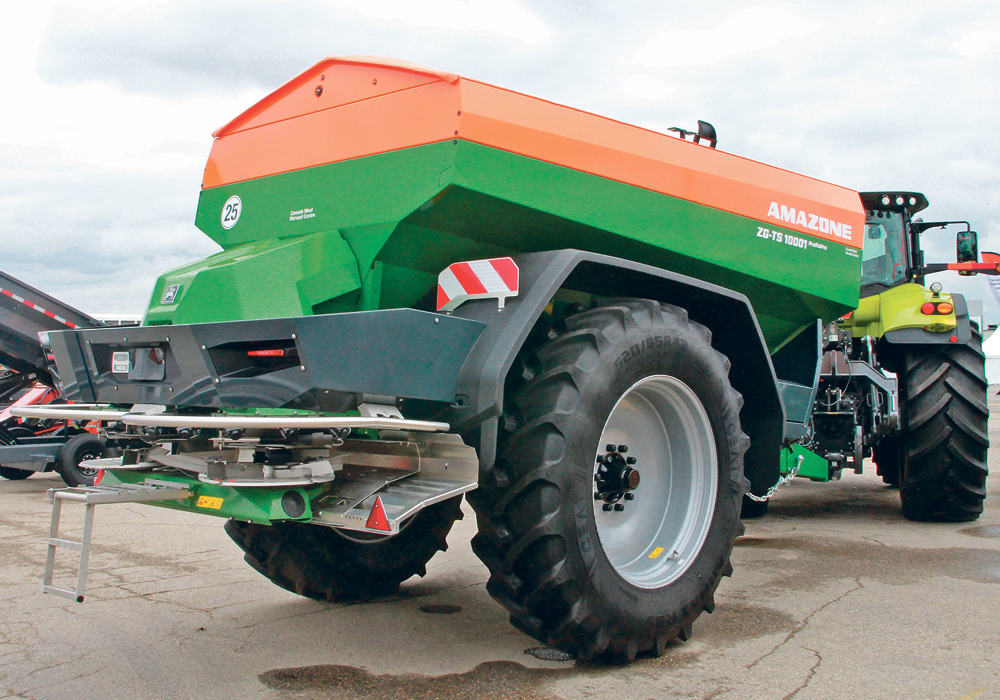 Amazone’s ZG-TS spreader comes in two tank sizes, with 7,500 or 10,000 litre hoppers and an optional steerable axle, to avoid ruts in the headlands. | Michael Raine photo
Amazone’s trailed spreader gets fertilizer to ground quickly and accurately with variable rate control
REGINA — With a spread width up to 54 metres and operational speeds of up to 30 km-h, the Amazone ZG-TS trailed spreader is capable of quickly getting product to the ground.
“The capacity is about 1,700 pounds per minute. That means you can spread a big amount in pounds per acre and still drive very fast,” said Arnd Kielhorn, product manager for Amazone.
The spreader comes with an on-line weighing system, called ProfisPro, which has four weigh-cells, one located at each corner of the hopper, working together to make sure the machine is properly calibrated.

“This gives an overview of the amount in the hopper, but the most important function for the weighing system is to calibrate the spreader outlet for the amount to spread. It works very frequently so we are very accurate with the output,” Kielhorn said during Canada’s Farm Progress Show in Regina.
The spreader’s AutoTS border spreading system uses three spreading disks at different angles on each side of the machine. It also has an automated system that varies where product is dropped on the disks, called GPS-Switch, which creates up to 128 part-width sections and enables sectional control.
The radar-based ArgusTwin sensors monitor the spread pattern, helping to maintain a consistent spread pattern, even with inconsistent fertilizer and weather patterns.
“We are able to compensate these effects automatically. Based on the radar-sensors, on both sides of the spreading system and both sides independent from each other, the drop point moves automatically with an electrical actuator and influences the spread pattern,” Kielhorn said.

A rubber floor belt is used to transport material in the tank to the back of the spreader, which he said is easier on the fertilizer than a chain-based system.
To ensure the floor belt is running at an optimal speed, a flap in the feed chamber is used.
“If the flap sensor is upwards it means that the floor has to run faster until the fertilizer will come against the flap and hold it up, then the floor belt will run slower. So we always have the right speed of the floor bed,” Kielhorn said.
The floor belt is hydraulically driven, as is the spreading system and steering axle, which all combine for a total hydraulic demand of no more that 130 litres per minute.
The ZG-TS 01 trailed spreader comes with either a 7,500 litre or 10,000 litre hopper.
“The axle is able to have a payload of up to 10 tonnes. With the payload of the drawbar it can handle the absolute payload (that) is allowed on the road, up to 8.5 tonnes. On the field we can put more. As you can see, we have a bigger hopper, about 10,000 litre.”
ADVERTISEMENT
The spreader has multiple brake options including oil- and air-pressure based systems.
“We have an interesting feature especially for farmers working with fixed tramlines — we have the option for a steering axle. That means we have exact turning of the wheels from the spreader, which follows directly the turn of the tractor’s wheels to avoid any damages of the plants in the field,” Kielhorn said.
The ZG-TS trailed spreader come ISOBUS ready, has a powered tarp for the hopper, a retracting ladder, a storage compartment on each side and a hand-washing station.
M

As I understand you work only with large farms and not small gardens on the backyard?

Working with the large farms will be more effective, from my experience

You are right that fast delivery is very convenient. I always order fertilizers with home delivery. So I usually prefer local companies, since delivery is faster. If I order online, I follow a track package from china. And every day is essential when working in the garden. I'm doing it for many years, but, like any gardener, I'm always looking for new recipes, new top dressings for plants. It's very important cos different plants in our gardens react to other fertilizers, which means that the top dressing should be extra. Some plants are very picky and even capricious.
Last edited: Jul 26, 2021
You must log in or register to reply here.
Share:
Facebook Twitter Pinterest WhatsApp Email Link
Menu
Log in
Register
Top