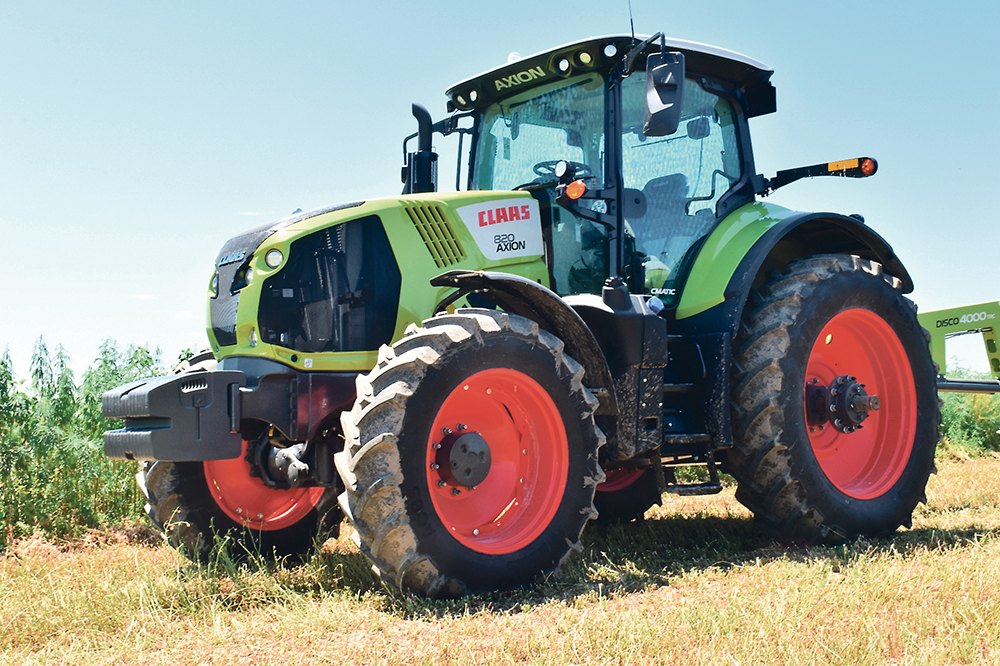 Claas Axion 800 Series tractor
OMAHA, Neb. — Claas of America officially launched seven new product lines Aug. 1 but gave its North American dealers a sneak preview July 15-16.
The Lexion 8000 and 9000 series of combines, Axion 800 series of tractors, Disco 4000 mower, Rollant 520 round baler and Volto 55 tedder all made their debuts. A sneak peek at new forage harvesting equipment was also provided but those details won’t be released until late August.
The new combine line got the most attention from company personnel. Claas deems its new series to be more powerful and more fuel-efficient than competitors. Engineers have upgraded the APS hybrid system of previous lines into the APS Synflow system for the new models. That gives it a higher processing and grain handling capacity and faster unload speed.

The new line is available in tracked or wheel models, both of which have a 40 km-h road speed. On-board sensors equip the new models with on-the-fly adjustments for crop type and conditions.
The Axion 800 tractor series has 200 to 285 horsepower, and “the most fuel-efficient p.t.o. horsepower in its class,” according to Claas.
It was developed for the livestock and livestock input producer, suitable for baling, manure handling and loading.
The series has 6.7 litre engines and a choice of two transmission models. It is also considered to be more fuel efficient than other tractors of similar size. The cab is designed for improved visibility.
Claas has 20 dealers in North America that are designated Axion dealers and plans to expand that number.
The Disco 4000 TRC mower is marketed primarily for dairy operations. Cutter bar and suspension features are designed for an evenly cut crop. Adjustable plates allow operators to choose windrow size. It has a 12-foot, six-inch working width.

The Rollant 520 is a four by four foot fixed chamber round baler. An update design aims for efficiently packed bales, so there are fewer to handle but more feed per bale.
The unit has eight newly designed heavy-duty rollers to manage tough crops and a reinforced frame that is thicker than the company’s 300 series.
The Volto 55 TH tedder is designed to spread crop more evenly for quicker dry down and improved nutritional retention. It features a faster ground speed and strong tube tine arms. The folding and tilt system allows for quick moves from field to field.